Apple Event is the exact time to announce that the brand has invested over $1 billion into making new content and the streaming service is set to compete with the giants including Amazon, Netflix and Hulu.

The Keynote event, will announce a new period for the company as it enters the fast-pacing over-the-top media streaming business, hosted at the Steve Jobs Theatre on Apple Campus today.

The company may also discuss combining all these digital services into a single topic similar to Amazon’s popular, Prime. Apple already has evaluated the possibility of discounts for users who subscribe to more than one service. The place itself also indicates the importance of the event to the brand. The live streaming video is designed to appear like a TV setup and has been switching between a handful of different angles of the Steve Jobs theatre.

Tap ❤️ below to get updates from @Apple pic.twitter.com/b6qno83rqS

The iPhone brand is expected to roll out a couple of new products at their Cupertino HQ in California today, including a Netflix competitor, a revamped news service and a subscription-based gaming offering.

Apple’s four new services announced during the event are:

Apple Arcade will promise a service that customers can play any number of games in the service’s catalogue on their iPhone, iPad, Mac, and Apple TV at no additional cost but for a recurring fee. Since all the games will be exclusive, they won’t be able to play in anywhere else.

The most anticipated announcement was Apple News+, a new subscription service that would increase the number of magazine and news brands available in the Newsstand. The move has been controversial because some publishers believe Apple is demanding too high a price to be featured. 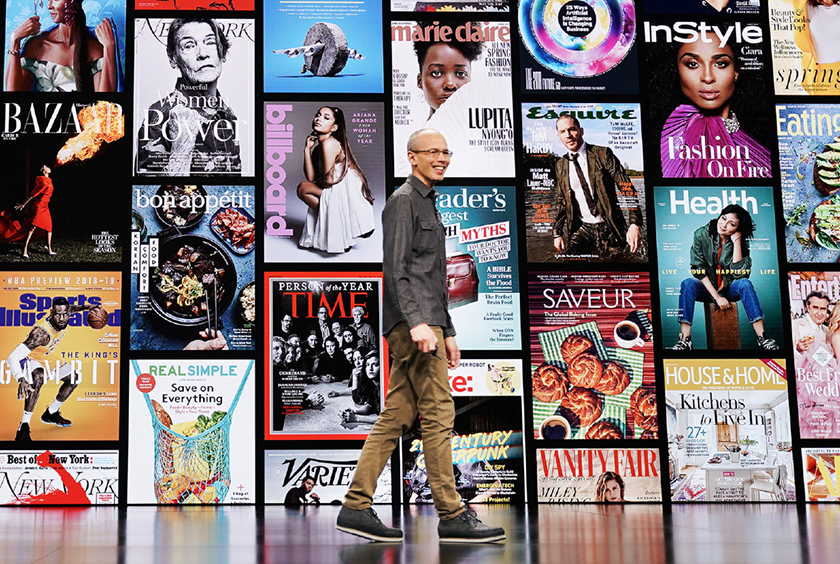 Apple News+ was launched yesterday in the US for $9.99 a month and Canada for CAD12.99 a month, and will be available in the UK and Australia later this year.

Apple, which first launched the Apple TV digital media player in 2008, unveiled Apple TV+, which will offer some original shows as well as subscription bundles to US TV networks such as HBO, Starz and Showtime. The company has invested more than $1 billion into creating new content and the streaming service is set to compete with the giants such as Netflix, Hulu and Amazon.

The celebrities have guested and come into play as the Storytellers and Producers like Oprah Winfrey, Steven Spielberg, Jennifer Aniston, Reese Witherspoon, Octavia Spencer, J.J. Abrams, Jason Momoa, M. Night Shyamalan, Kumail Nanjiani and Jon M. Chu. The company plans to curate original content like Spielberg’s ‘Amazing Stories’, a crime show ‘Are You Sleeping?’ which is produced by Reese Witherspoon – and her new company and starring Octavia Spencer. ‘Calls’ is another adaptation of a French short, ‘Central Park’ is Loren Bouchard’s musical comedy and ‘Defending Jacob’, named a thriller adapted from William Landay’s novel, starring Chris Evans, among others.

The new service will mix stories from newspapers, websites, and magazines into a new tab in the Apple News mobile app for Apple devices, and will come as part of an upcoming iOS 12.2 software update, and will also include a revamped icon and interface for the Apple News app. Apple intends to charge about $10 per month.

It is also rolling out a separate ad-free TV service called Apple TV Channels, where users can buy single channels such as HBO or Sky Atlantic. According to the company, the feature will launch in May.

Acoording to The Verge’s report,

Apple has been looping a video from the theatre, teasing its focus on television. The company is building a new content store focused on offering bundles with cable services like HBO, Showtime and Starz. Put more simply, Apple may be looking to disrupt cable TV by essentially becoming a cable TV provider.

Presenting perhaps the most lucrative feature for Apple, the company is also establishing its own credit card, backed by Mastercard and Goldman Sachs, will be initially launched later this year in the US. The Apple Card can be stored electronically on the iPhone or Apple Watch as an integration on the Wallet app or as a physical titanium card, and will offer 2% cashback on all purchases using Apple’s payment services Apple Pay. Apple Card is expected to launch in summer.

Of course this isn’t the first time the company is collaborating with celebrities, hence the Mac spot is a total breakthrough on November last year.

The Hollywood-like cinematic spot was shot entirely with the iPhone 11 ...

Apple has bought a UK based startup Operatedata Ltd, the official operating ...

Adobe Announces next generation of Creative Cloud at MAX 2018 and ...