To promote their new AirPods with wireless charging, Apple focuses heavily on music and the wireless design of AirPods, in a breezy way.

In a perfect combination of music and fantasy, turning an ordinary day into an impossible journey. Much like “Welcome Home” previously, “Bounce” reflects what life can look like when the feelings and freedom technology enables become reality. 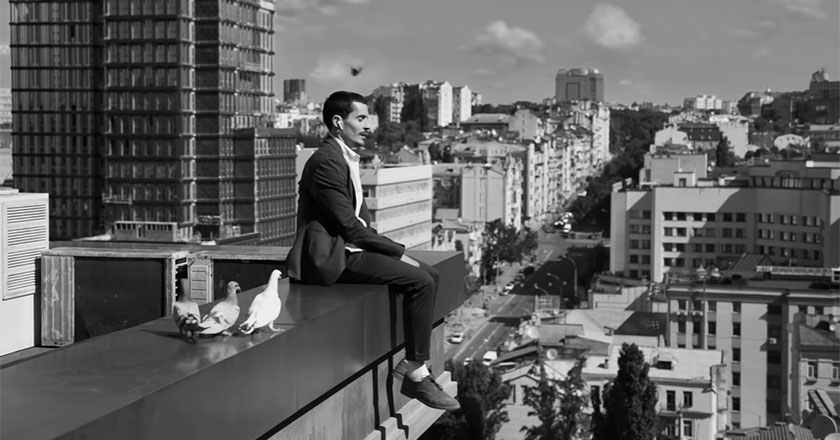 In the film, a man who is tired and dejected, puts his best face forward before heading out the door. But once outside, he realizes the world isn’t as hard as he feared. Instead, the gritty environment around him cushions his falls and helps him leap to new heights. The spot is directed by Oscar Hudson, who also is the director of Radiohead, and filmed by TBWA Media Arts Lab.

As an ad for Apple’s wireless AirPod headphones, the spot was fittingly created without the use of wires or a harness. In fact, almost all of the gravity-defying movement in the spot was made using only effects, but not CGI.

The team shot outdoor scenes in Kiev, Ukraine, before recreating the entire town on a set inside the country’s largest airplane hangar. The ground, however, was built six feet off the floor, to allow space for trampolines built into the sidewalks. The actor in the film is a protégé of high-flying choreographer and acrobat Yoann Bourgeois, who bounces off a grate in the film, is actually bouncing off a grate made of trampoline material. Another trampoline is painted to look just like a real hole.

For a scene where Bourgeois falls sideways beside a woman on a bench, two shots were merged into one. The actor bounces off a specially-crafted surface, and the camera was turned 90° to film the woman, who was strapped into a bench built into a wall. The film was shot 12 days, a feat that required 200 artists and technicians.

The spot is backed by a version of the 2016 song “I Learnt Some Jazz Today” by producer and songwriter Tessellated. The original track was less than two minutes long and the Apple team worked with the musician to record a longer version now available on Apple Music.

The brand released a Christmas spot called “Sway” two years ago, it also resembles this one in style. Seems like Apple is into dancing more than we could think of.

works | Digital Ad Campaigns
Driven By Intuition: Car By Lexus, Story By Artificial Intelligence, Directed By The Oscar-Winning Kevin Macdonald
Lexus, a brand famous for being at the leading edge of tech-innovation, rolled out Driven …

works | Digital Ad Campaigns
Airbnb’s Halloween Contest Lets You Stay In Dracula’s Castle
Want to do some trick-or-treat this Halloween? Then you better join Airbnb‘s giveaway trip to …

works | Digital Ad Campaigns
Dinner’s Ready! To Celebrate Italian-ness And Diversity, Barilla And GCDS Collaborated In A Short Film
Are you ready to have a fashionable dinner served by Sophia Loren? With the new …
×